A truly modern user interface in
Siebel 15 and Siebel 16!

A truly modern UI in
Siebel 15 and
Siebel 16!
+1 (201) 820-0400
Siebel Open UI is the new browser independent user interface for Siebel CRM. The user interface works on any device with a modern browser - e.g. Apple's Safari, Firefox, Google Chrome and Internet Explorer. Siebel Open UI is based on HTML5, JavaScript (including jQuery) and CSS.

Siebel 15, aka Innovation Pack 2015, was released in May 2015 and includes a new theme called "Synergy". This theme is almost identical to the user interface in existing Oracle Cloud applications like Oracle Sales Cloud, and Oracle Service Cloud. The “Synergy” theme has a modern look and feel, and the “Screen Tiles” at the top of the page allow for easy navigation with touch screen devices.

The "Aurora" User Interface Theme, which was first introduced in Siebel Innovation Pack 2014 is also available and remains largely unchanged.

Open UI does not only allow you deploy Siebel on any modern browser and device, it also allows you to develop modern usability features using based on HTML5, jQuery, etc. E.g. drag-and-drop associations between record, record previews invoked by hover over, "type ahead" querying, etc - such enhancements are very important for user adoption.

Accelsior has developed a number of videos that highlight the possibilities of Open UI. A select sample can be found below.
The screen shot below shows a modern and subtle Open UI Theme developed by Accelsior for a client.

Do you know that support for Internet Explorer 8 ended in January 2016? And that this means that full support for Siebel's High Interactivity Client also ended? If you have not already done so, now is the time to start planning your organization's upgrade to Siebel Open UI in order to stay on a supported platform.

But it's built on technologies and techniques that are often foreign to Siebel implementation teams. Most organizations therefore need external assistance to deploy it.

At Accelsior, we can help you take advantage of Siebel Open UI - quickly and successfully. If you want to understand what it would take for your organization to migrate to a fully supported platform, deploy Open UI and take advantage of the possibilities it provides, contact us today. 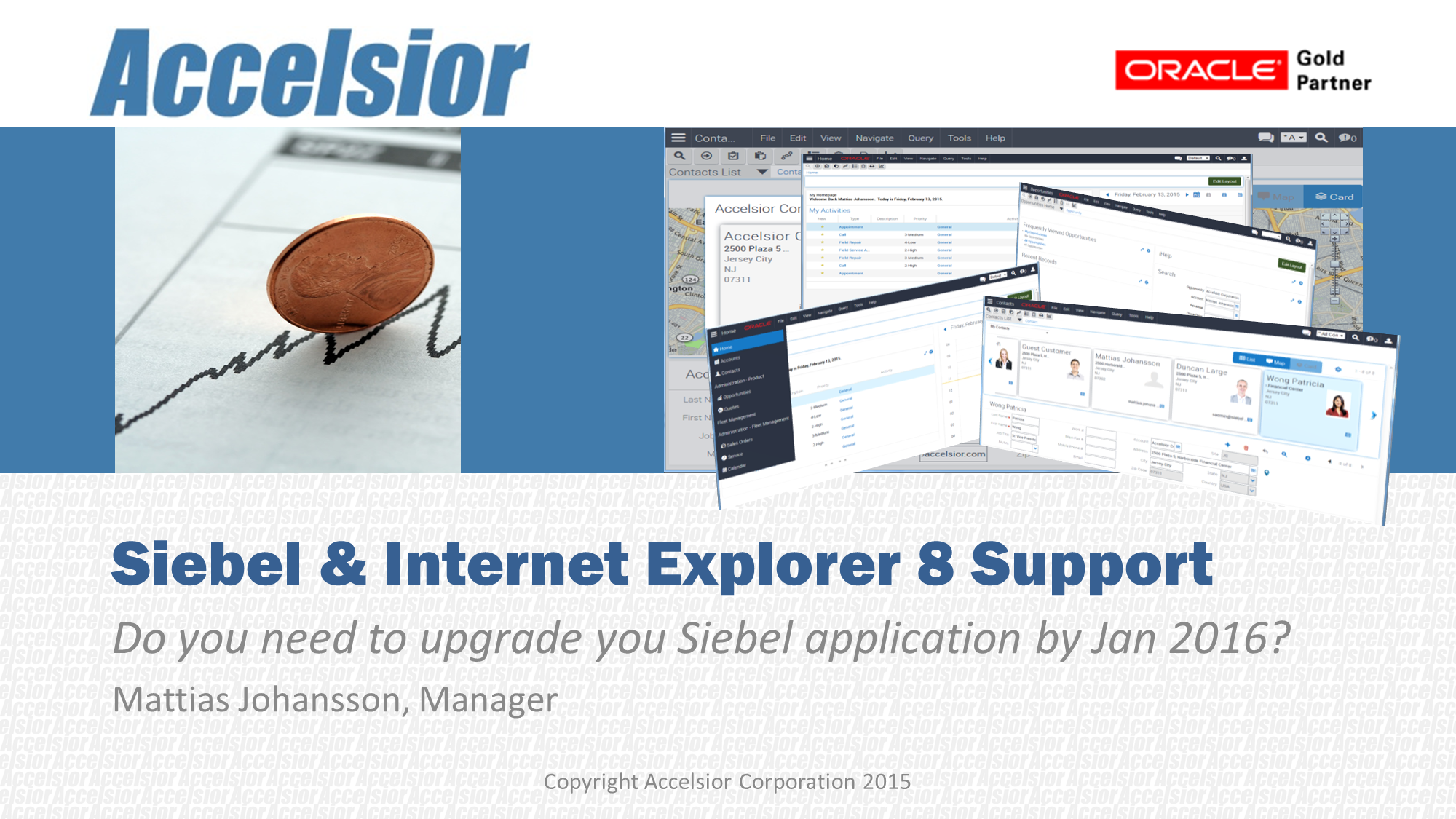 Support for Internet Explorer 8 ended in January 2016.
Do you know why that means that you need to deploy Open UI to stay on a fully supported platform?
Click on the image to watch a short video to help you determine whether your Siebel platform is fully supported with your version of Internet Explorer and what you need to do if it is not, or contact us to talk to a Siebel Upgrade specialist.